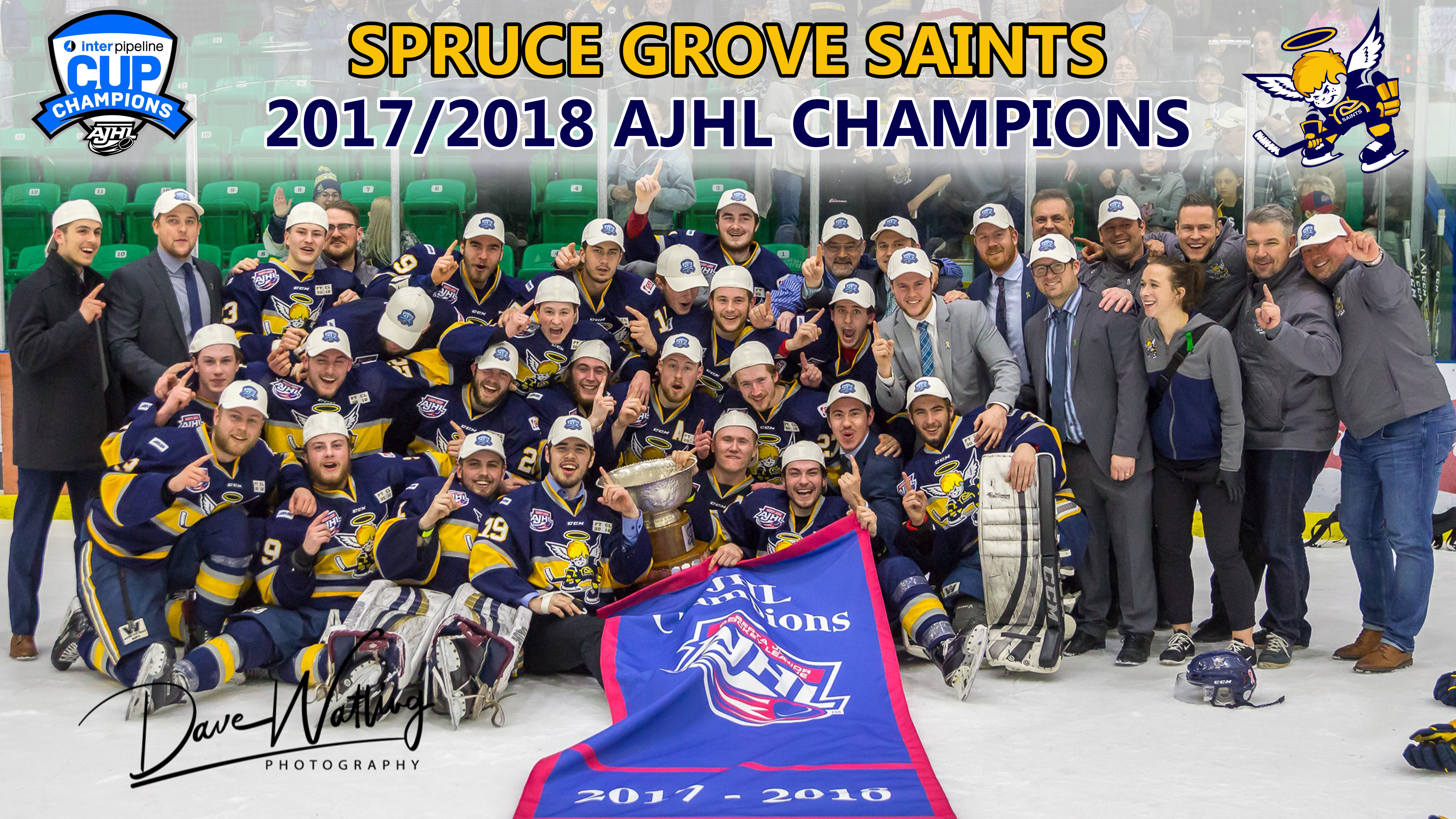 The Spruce Grove Saints are Alberta Junior Hockey League Champions and winners of the inaugural Inter Pipeline Cup.  Spruce Grove defeated Okotoks 3-2 to win the series on Friday night in game five of the League Final.  League Commissioner Ryan Bartoshyk and Harley Stav of Inter Pipeline awarded the Inter Pipeline Cup to Team Captain Josh Harris in front of a sold-out crowd at the Pason Centennial Arena in Okotoks, AB.

Saints Captain, Josh Harris, was awarded the 2018 AJHL Playoff MVP Award.  Harris (Edmonton, AB) scored the game winning goal in tonight’s victory and was the Viterra AJHL Star of the Game in both game four and five of the series.  The fourth-year Saint recorded 6 goals and 15 points in the playoffs, including two game winning goals versus the Oilers.

As the top team in the Viterra AJHL North Division through the regular season, the Saints guaranteed themselves a first round bye in the 2018 Playoffs.   They went on to sweep the Grande Prairie Storm in Round Two and the Whitecourt Wolverines in Round Three to capture the North Division Title and advance to the League Final.  The Spruce Grove Saints have now won five AJHL Championships (2010, 2011, 2014, 2015, 2018).

Spruce Grove has been a dominant force finishing on top of the North Division standings for nine of the past ten seasons, with the only exception being a third placed finish in the 2016-17 season.  In 2017-18, Spruce Grove was 47-10-3 with 97 points in the regular season, and recorded the most goals for (262) and fewest goals against (138) in the North, second only to the league leading Okotoks Oilers in each category.

The Saints will now meet the BCHL Champion Wenatchee Wild in the 2018 Doyle Cup for the right to represent the West at the RBC Cup National Championship.  The best-of-seven series will begin in the BCHL on April 27th & 28th, 2018. If one team sweeps the first two games, the remainder of the series will be played in Spruce Grove, AB. If the teams split the opening two games, Game Three will be played in the BCHL before the series switches to Spruce Grove, AB for the remainder of the series.